JPA is indisputably a great simplification in the domain of enterprise applications built on the Java platform. As a developer who had to cope up with the intricacies of the old entity beans in J2EE I see the inclusion of JPA among the Java EE specifications as a big leap forward. However, while delving deeper into the JPA details I find things that are not so easy. In this article I deal with comparison of the EntityManager’s merge and persist methods whose overlapping behavior may cause confusion not only to a newbie. Furthermore I propose a generalization that sees both methods as special cases of a more general method combine.

"A newly created instance of the entity class is passed to the persist method. After this method returns, the entity is managed and planned for insertion into the database. It may happen at or before the transaction commits or when the flush method is called. If the entity references another entity through a relationship marked with the PERSIST cascade strategy this procedure is applied to it also." 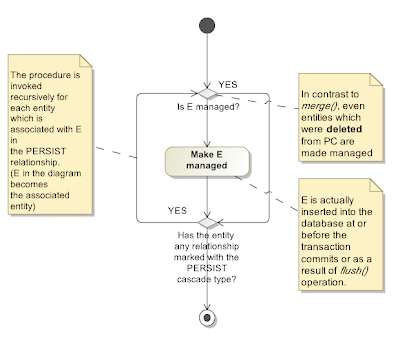 The specification goes more into details, however, remembering them is not crucial as these details cover more or less exotic situations only.

Note: If the entity has been removed from the persistence context then it becomes managed again when passed to the persist method. If the entity is detached (i.e. it was already managed) then an exception may be thrown.

In comparison to persist, the description of the merge's behavior is not so simple. There is no main scenario, as it is in the case of persist, and a programmer must remember all scenarios in order to write a correct code. It seems to me that the JPA designers wanted to have some method whose primary concern would be handling detached entities (as the opposite to the persist method that deals with newly created entities primarily.) The merge method's major task is to transfer the state from an unmanaged entity (passed as the argument) to its managed counterpart within the persistence context. This task, however, divides further into several scenarios which worsen the intelligibility of the overall method's behavior.

Instead of repeating paragraphs from the JPA specification I have prepared a flow diagram that schematically depicts the behaviour of the merge method: 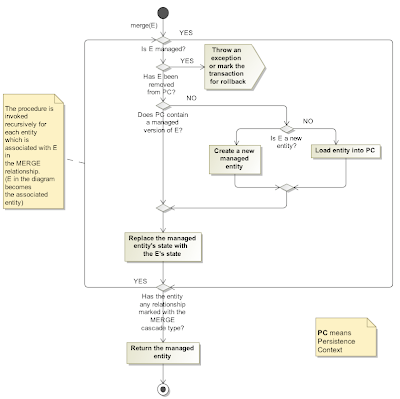 Note: Both SQL operations are postponed at or before the transaction commits
or flush is called


So, when should I use persist and when merge?

The persist method implements inserting a new entity. The merge method implements both inserting and updating. There is apparently one method missing, which would implement updating without inserting. I can go on in generalization and think about possibility to define a custom behavior that occurs when an entity is being combined with the persistence context. From this point persisting, merging and updating would be mere three strategies how to combine an incoming entity with the content of the persistence context. The EntityManager interface would contain one general method, let's call it combine(entity, strategy), that would take two arguments: the entity and the strategy used for combining the entity with the persistence context. The strategy would be an interface having two main implementations: PersistStategy and MergeStrategy which would comply with the persist, resp. merge method. In this design both methods would simply delegate their invocations to the combine method passing the corresponding strategy instance.
The concept of cascade policies could be also generalized: instead of using the values from the CascadeType enumeration a programmer would use the class of the strategy itself as a value for the strategy attribute (or other) of the relationship annotations.
Instead:
the code would look like this:
If the programmer wanted to declare a relationship through which the update-only entity combination strategy would be propagated to an associated entity, he/she would do it as follows:
Some generalization should be also done in generating SQL command. Considering that the persist and merge strategies result in generating INSERT or UPDATE SQL command, there should be also some mechanism that would allow a custom strategy to generate its own SQL commands.
Posted by Zbyněk Šlajchrt at 10:33 AM